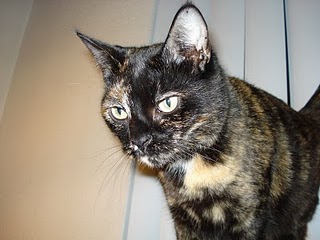 Well I thought this would be an easy one but apparently there are lots of domes out there. Fortunately Mao did not think I looked like a dome without sitting on one.   Gracie and Cody of Camie’s Kitties (and no doubt guided by their Angel friends) found me saying, “We are going to guess you are on top of the Tacoma Dome.  Cody and Gracie.”   And they are right.

Cory also knew where I was and planned to drive by again in case no one else found me. She said, “My mom has made many a drive between Seattle and Portland and the Tacoma Dome is right off the I-5 freeway. Hard to miss and very distinctive with a big ol’ flag on it! Glad you were found Chey!”

Laila and Minchie made us laugh, “We “dome” have a clue where you are Chesuli.”.

At any rate, the Tacoma Dome was built back in the mid to late 1980s (the Woman was still living there).  It is darker on the bottom and gradually gets lighter which gave it a rather riske nickname back in the day.  Suffice to say it was the Tacoma Booby but it alliterated better than that… And it does sort of look like that still, once you’ve got the image in your mind.  Alas the grey day and the snow prevents the colors from showing through brilliantly enough to be recognizable.