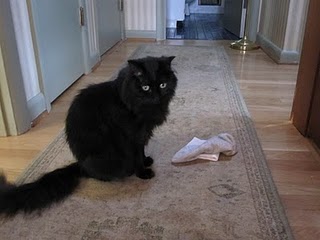 Silly me.  We thought we might fool a few cats into guessing I was back in Alaska, but Cory came by and got it right away.  Cory said, “You are in Roslyn Washington!!!”  Then both Cory and Laila and Minchie said, “A souvenir and gift shop in Roslyn, Washington. The building became famous worldwide as the fictitious office of Dr Joel Fleishman, the leading character on the critically acclaimed television series Northern Exposure, from 1990 to 1995. The Northwestern Mining Co. period sign located above the door, and Dr Joel Fleishman’s name inscribed in chalk paint on the window (as seen in the opening credits of the program) remain to this day.”

This was apparently a quote from another website.  It certainly says far more than I know!

On their way back from visiting their steer (one quarter of which now resides in the freezer in the garage) the Male wanted to stop through Roslyn thinking that people would have forgotten Northern Exposure.  Like many famous shows, obviously there are many who still remember and love the show!

Gypsy and Tasha got it and so did Simba.  Simba gave me the address, “The address of where you are is 112 West Pennsylvania Avenue, Roslyn, WA. Good for Google, because otherwise I would have guessed you were in Alaska.”  The Carolina Cats also recognized where I was!

Alas for Mao, “OMC. My woman started humming some tv theme song when she saw this pikcher. Make her stop before my eerdrums ixplode.” I feel for you. My human sometimes does horrible things like that.