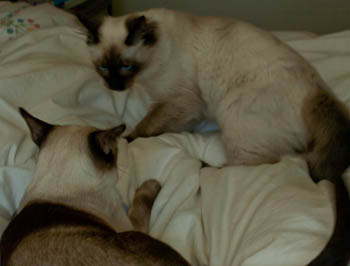 Ever since our post last Thursday which really helped us clarify some things, different things have been happening for the Woman and she is quite thankful for that.   As she put it, she realized that mostly people Ask questions and then give.  The Cat blogosphere gives and then asks questions!  She thinks that is so great and wants to make that kind of community the kind she spends most of her time in.

Since then, she has found a few things that have really told her that she is on the right track.  One thing that happened that was interesting, is a friend from Facebook (a fellow blogger, but not specifically a cat blogger) works in social media and she is loosing her job at the end of the month.  The Woman said hey! Check up on me with Linked in–I have a contact that may be helpful.  So they linked up together and then the Woman contacted her Social Media contact (her only one), Lena West.

Lena gave a FANTASTIC talk at Blogpaws on using social media and putting things out about how to think of a Social Media Strategy.   The Woman was really impressed.   Anyway, the Woman told Lena about her friend and rather than waiting to see if the friend came to her, Lena connected with her and talked about exactly what she did  and the sorts of contacts she has that could be helpful.  The Woman was like–LENA SO ROCKS.  So we thought we’d give her a shout out today and say we’re really thankful for her and for people like her.

Oh and as annoying as Ichiro is, thanks to him the Seattle Mariners are following me on Twitter…