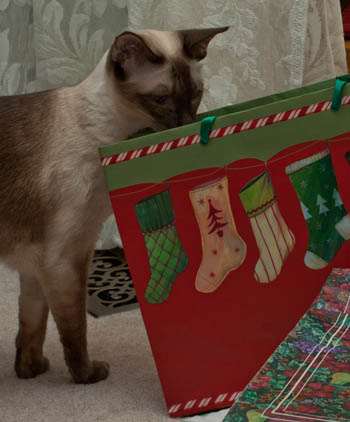 From the Associated Feline Press Corps:

Former Presidential Candidate Cheysuli was caught sneaking a look in a Christmas gift earlier this week at a photo shoot.  Upon being questioned the former Candidate said, “I just need to see what sort of reaction I should be having! You know–it’s a photo shoot, not a real gift.”

Critics were not convinced.  However, the former candidate went on, “I’m just so grateful that I get any gifts!  And I’m grateful that I have so many friends and admirers that I get to do photoshoots like this.   I think that’s what’s important.”