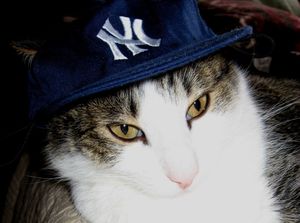 Wow, it’s been awhile, but once again ‘Kaika found me.  Or you can call him Smarty Pants ‘Kaika like Mao, but that might be a little rude.  At any rate, he said, “Are you in Skagway, Alaska?” and then he said, “And isn’t the Golden North Hotel in this picture haunted????”.  Smarty Pants Simba then said, (moments later) “Are you about to cross State Street in Skagway Alaska?”

Eric and Flynn knew as did the Furkids(no doubt led by Angel Sniffie)!  So Skagway must be a major place.   A few others at least got that I was in Alaska.

Cory said, “No matter where you are Chey, I’m just disappointed I didn’t see Whitey in the background checking out diamonds for a certain black furred ladycat…”  I think that any where you cruise Whitey can find great diamonds. Many of those stores are chains that are at every port.   Believe me, Whitey can shop anywhere in the world for your diamond Cory. Maybe he went somewhere warmer?

Skagway was one of the Woman’s favorite stops on the cruise.   It was where the men started up into the hills for the Klondike.  Well, it was one of the main routes.  It tooks months on foot with pack animals to get to the Klondike, but they started in Skagway.  The town is still sort of an old time town, very small.   Our naturopath has a friend who runs the cupcake store in town!  Unfortunately the Woman didn’t know that until she came back.    The Woman and the Male took a train up into Canada and then a motor coach down and saw some amazing scenery through there.   For all the Canadian cats, she says, Canada still has the best scenery!