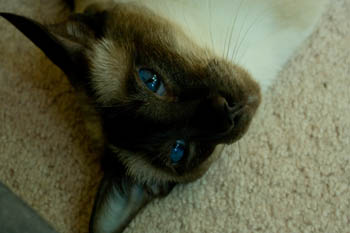 Gemini reporting on the latest Cheysuli update:  Momma is still waiting on the results of an FELV/FIV test they added due to some other weird stuff in her blood work.  She has been tested before but the Woman doesn’t know if SHE had her vet test of if the breeder’s vet tested her.  She had paperwork showing FELV negative on her.

Chey hissed at Ichiro last night which is good.   She was bathing herself a lot and got up and scratched on the carpet and the scratching post.  She ate some fish flakes. She even went to the food dish, but she only ate some fishy flakes there so Momma was a little disappointed.  She is hoping that as she gets better she will start eating some more solid food than just fishy flakes.   She hates hates hates force feeding her, although the last two times have gone a little easier, as Chey is actively swallowing and not just letting it dribble out the sides of her mouth.

Organ function is good.  Her monocytes (part of the immune system) were slightly elevated suggesting bacterial involvement.  The weird part was that her red blood cells were nucleated. Normally red blood cells do not have a nucleus but these were. Typically that is seen in cases of anemia, but Cheysuli is not anemic.   It can be an endotoxin response (say her immune system killed off a lot of nasty bacteria really quickly) or it could be lead poisoning or it could be something like feline leukemia.   Leukemia is the most typical and as this vet never tested her they are retesting her.  I hope it is negative because then I could have it too!  That is what scares Momma the most is the idea of having to manage a full household of FELV kitties again (she had to do that once). 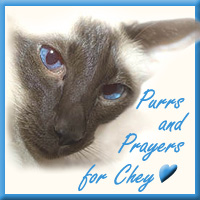 I can’t wait until Cheysuli is all better.  This kitten is a lot to handle for a little cat like me!

Momma and I want to thank KC and Zoolatry for the graphic that people have and all the kitties who are purring. Maybe that is why Chey healed so quickly that she had this endotoxin response–our purrs are just so strong!  And well, you know how Cheysuli doesn’t like to be fussed over in certain ways…. We are purring hard for Zoolatry’s Poppy too.  Even Chey, cause she is purring even though she is sick.