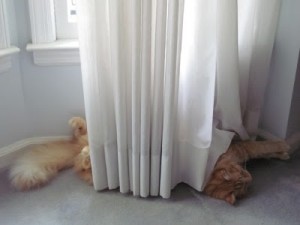 By a whisker, Simba found me before Eric and Flynn did!  Several folks looked for me close to home in Ballard (not a bad place to check) but I was farther away, keeping an eye on my human while she traveled.

Simba said, “Are you in Petersburg Alaska at the Boyer Wikan Fisherman’s Memorial? You People just went on a trip to AK, so I bet you went and got yourself lost there looking for them.”

Eric and Flynn said, (getting the spelling right) “It is at the Son’s of Norway Hall and the Bojer Wikan Fishermans memorial park in Petersburg Alaska. Just look at all those birds watching you from the roof. You need to get up there for a good feast, or would you rather have the fish?”

Both showed up at exactly the same time but Simba’s answer was listed first for us.  I must congratulate them!

Both cats were very good about their use of the internet.  Eric and Flynn said, “We have to admit that mum helped. She knew your Humans had been to Alaska so she googled Norwegian fishing boat memorial in Alaska, and then when Petersburg came up, she knew that had to be it. When we went to that site we saw the memorial.” 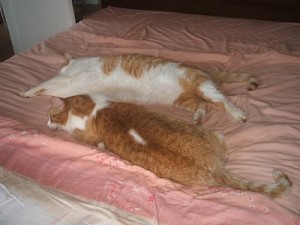 Simba also had some help (after all I was trying to stump him a little!), “Mom and Dad didn’t actually go to Petersburg, but they met a couple who had been and talked about how much they enjoyed that part of their trip when they took the ferries. We assumed you were in Alaska but since it didn’t have the typical Alaskan appearance, Petersburg came immediately to mind. We confess to having googled Petersburg and in the very first picture, saw the red and white sail and statue. I can see from Eric and Flynn’s post that good choice of search terms can be a big help!”

‘Kaika is kicking his human, “Well done, Simba and Eric and Flynn! And the human was just reading the blog of a photographer who was shooting in Petersburg, Alaska! Duhr!”  We’d love to find out that blog.  The humans saw a National Georgraphic ship in port while they were there and were wondering what they were filming, but there were a lot of photographers wandering around (some looked more professional than others–a good camera is just not the way to tell….)

This is just outside the Sons of Norway Hall where the Male won $30 playing Bingo with his mother.   The Woman won nothing.