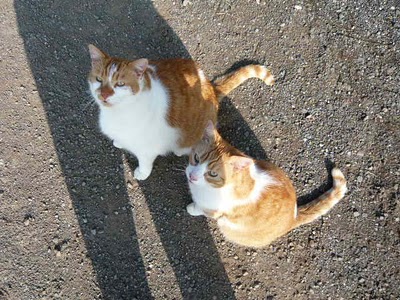 Well I thought this would be a diffcult one but Eric and Flynn had no trouble, although they said they didn’t know! “We don’t know, but that looks like Tower Bridge behind you. We can’t see the badge on the hat very clearly but it looks similar to the Royal insignia, so maybe you are at the Tower Bridge exhibition in London. Are you wearing a Hussar’s uniform? We are not at all sure about that though.”

Keiko excitedly pointed out that I was on Tower Bridge.   Fat Eric was bemoaning the fact that he knew where I was but his human didn’t get here early enough to guess.  Eric was correct, “Drat, other people recognised Tower Bridge before me…That’s definitely a picture of Tower Bridge behind you but I don’t know where you are exactly, unless you are in the exhibition at the Tower Bridge Experience – I’ve never visited it so I don’t know what they have in there.”

‘Kaika knew too but was worried about who I was, rather than where.

For those who were wondering why I was the male… well guess who took the photo and who was in the photo so I could photoshop out their head? Who would give me great pleasure to erase?!  HA HA HA!!!