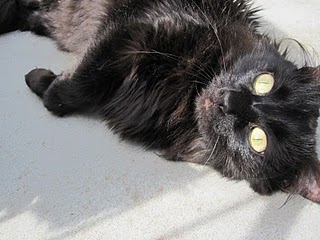 So many cats got that I had put a big old hint–the sign in the corner reads Tokul.  When searching it many of them found Tokul Creek Washington–and yes I was there.  I think I am at the watershed area.   It’s near the Snoqualmie River.  In fact the Woman was thinking she was getting close to the base of the falls but that road no longer goes through. There is a lot of construction down there right now.

Cory was the fastest guesser!  ‘Kaika was only second behind! I am impressed at how many things my international friends said.  The Poupounette found that Tokul is part of Hancock Timber.  Eric and Flynn said it was in King Country (yes it is!).  Simba pointed out that it is in the Iron Horse State Park in Washington.  Lots of these things we didn’t know–but we did find that there are a couple of branches of the trail (and we don’t know which one this ends at) so we will give everyone credit.

I think this is technically the END of the trail rather than the beginning, which appears on the map to start up the hill.  The Woman didn’t walk all the way up there. She took this photo for a Find Chey that wouldn’t be impossible!  We are impressed with the numbers of cats who googled: Katz and other Tales, Parker, Sweet Praline, Sniffie and the Florida Furkids, and Pierro (although maybe he just knew?).

I do not think there are any ticks here this time of year–it’s still a bit chilly for them to come out, so I am pretty safe. Ticks are not a big deal.  We do get them but not the really bad ones and then mostly in the summer time.   I am more worried about coyotes, elk, bears, cougars and vishus deer.  We see coyotes and vishus deer near our house and this far out, our friends see bears and sometimes there are signs of cougars.  On the way to her work, the Woman sees Elk, which look an awful lot like vishus deer, so to be safe I will watch out for them too!