Hide Search
You are here: Home / News and Awards / I Rock (of course) 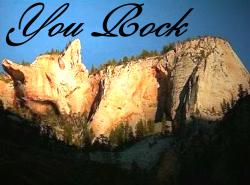 Wow! The FurryDance Cats gave me the You Rock Award!  I am so excited. You know they are curly cats just like my friend Daisy.

I get to pass this one to five other bloggers (oh dear that could be hard) so how about:

Max (because he so does)

I don’t know how many other cats have gotten this award. It’s always so hard because we’re usually at the tail end of the award list so hopefully someone in there hasn’t gotten it before!