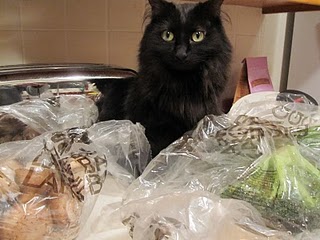 Well we dedicated Find Chey Friday to Cory because the Woman messed up her photo and forgot to mention her last week.  TK came by and guessed first and got it right, “We are not sure where him is, he sure is cute snoozing away. But we guesses that is Mt. Hood in the background, so him would be in Portland OR? Thanks for dropping by our place! TK and Squashies”  Of course I am a HER…

Eric and Flynn said, “Is it Mt. Hood in the distance in the Cascade Range?”  They also guessed I was on I-84 but I was not on I-84 (we weren’t there yet) but Cory got it most clearly, “Are you actually on the Glen Jackson Bridge!!!!?”

Sweet Praline was very accurate saying, “I actually knew this one because my mom went there. I’m going to be more specific. You are riding comfortably on the dashboard of the car in Portland, Oregon with a view of Mt. Hood in the distance. Mom says it is awesome to fly past Mt. Hood in a plane because the mountain is as tall as the plane is high!”

Sniffie and the Florida Furkids, Parker and A Few Good Cats all managed to identify Mt. Hood or that I was in Portland (of course they may not have been correct. I am not yet at the island which means I was probably STILL in Vancouver, Washington (but alas the Woman doesn’t know if she was in Washington or Oregon at the time she snapped these shots). Pierro and the Island Cats had a good idea where I was as well.  Oddly many people got it from the Oregon license plate ahead of me…as if Mt. Hood were the only mountain in Oregon.  Those down in Bend will have words about THAT.

I am not actually on the dash of my person’s car–it’s her office mate’s car.  Therefore, Max I can’t tell you about the Mardi Gras beads as they are not mine.  Alas.

Laila and Minchie said, “You are in your car following that Toyota ahead of you to the dealer to have it’s gas pedal fixed.”   The Woman could have been doing it but Toyota had not yet recalled their cars so it is unlikely that is what they were doing.  They were headed to the cabin to SKI on Mt. Hood!