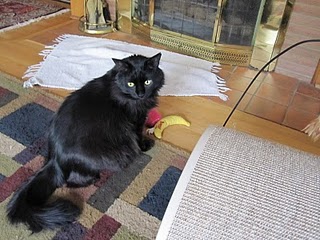 Well, after a long dry spell of saying she never knew where I was, Cory found me again this week saying, “I’m just taking a wild guess based on something I read on a Meezer bloggie…are you in St. Louis? Mom has actually been there a couple of times but doesn’t remember seeing this building.”

Derby then said, “Mum is agreeing St Louis. She wants to say it is the train station. Now it is a museum.”

And ‘Kaika and Cory said, “Is it Union Station?”

And Willow said, “OMC, of all the times not to check in with you on Friday! Clearly you are at Union Station in St. Louis, which of course is where China Cat & I live! Hooray for the ones who guessed it right!”

Sabrina, Sam and Simon kindly gave me the idea of visiting this lovely place and time.   It is an older photo so this doesn’t look exactly like that any longer.  I figured I would make you all work a bit!

Simba said, “Wow. We have been to St Louis often, and yet Mom and I were googling all sorts of faraway countries for pictures of town halls, and post offices and everything. We thought it must be an Iron Curtain country!!!” He also told us about a spaghetti place there too!  Maybe Cory can get some cheese and I can get some pepperoni?!  And Simba, no doubt Maobert takes great satisfaction in the fact that you were stumped…

Daisy gave me a good idea for another time, “Is that the Willie Wonka’s chocolate factory?”