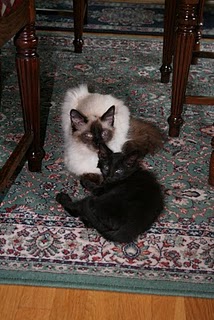 Ack!  No one found me!  I am lost! LOST I TELL YOU!!!  Actually, I got this photo from Cory Cat and it is Lake Ewauna in Klamath Falls Oregon.    I said this was my original home because the breeder who bred me lived there.   Before the Woman adopted me, I had had three litters of kittens.  Shortly after the Woman’s first Siamese, Simone died (only 10 days after the Iggy Cat), she started looking into adopting another Siamese.  She started looking around and contacting breeders because so many of the personality traits that Simone had are considered breed type traits of Siamese.

At any rate, she found this breeder who was going to have kittens about the time the Woman was looking to adopt.  She also gave some good references and the Woman was to meet her at a cat show.   However, the breeder broke her leg and didn’t get to the cat show on the Oregon Coast.   The Woman did and she saw a Siamese she was in love with. She talked to THAT breeder and the cat the Woman adored was a kit from my breeder. It could even have been one of mine!

My breeder decided not to breed me again so she “petted me out” to the Woman for the cost of the spay and I have been running the house ever since…The Woman and Male drove down from Vancouver to Klamath Falls and saw some sights. They spent the night and then visited my breeder and picked me up and went back home.  The breeder was quite surprised when her Show Queen, the alpha cat in the house let the Woman pet her.   She was not friendly.  Of course, neither am I!  At any rate, I made the Woman pay for taking me away from my kits when she did.  I ignored her for almost a week–until I met Gemini and I was so thrilled there was a little kit.  Gemini was only a few weeks older than my own would have been!

Roseberg is down south in Oregon so ‘Kaika (smarty pants as Mao would say) was the closest guesser!