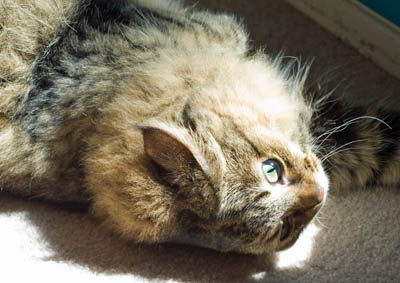 The sun is so nice. I do like not having to share my sunspot with Cheysuli. I am thankful for that. Yesterday we got some new windows and it was very scary and noisy.   Now Cheysuli cannot sneak back in so easily when she wants to eat… Besides, we would hear  the weiner mobile.  I am very thankful for that–Cheysuli chases me!

I do not think anyone will notice her in the Weiner Mobile.  After all, it’s sort of like hiding in plain sight right?

Momma has written down a rant for me to share, so if you don’t want to hear, it you can just think about how cute I am and ignore it….

For everyone who wonders why Momma is such an advocate of a public healthcare option and gets so upset when people say we don’t need it.  As an acupuncture student she had to work in public health doing acupuncture.   Additionally she worked in her first years as a substitute acupuncturist in the Cascade Aids Project.  This was a nonprofit group that helped people with AIDS.

In both cases she saw first hand what happens when people have access to healthcare only through the emergency room and what does and does not get done.  Many of the things that these people suffered with and she got to help with were things that would not have happened if doctors could see  them promptly. Unfortunately the people at the clinic and at the AIDS project did not have much money. Many did not have jobs.  Some were too sick to have jobs.  Because they did not have money they could not buy health insurance (and the AIDS people had a pre existing condition) and could not see a doctor except some of the naturopathic students at a public health clinic.

In both cases, these non profits relied on outdated herbal supplements and nutritional supplements to help their patients.  These were things that could be gotten for free from practitioners around the area.

If you are against a public option, Momma says that is fine but don’t tell her she is wrong until you have had to sit doing hospice work on people who would still be alive if they had not had the misfortune to loose a job or loose their insurance when they needed it most.  Those stories people are writing in and telling happen every single day.  Don’t lie to yourselves.   If anything most people minimize what was done and take too much responsibility for things they should have done differently.  They are not crying wolf.  Momma has had to sit there and watch them die.  Acupuncture is good but it can’t save someone who should have been treated for a potentially life threatening illness years before they actually got treatment.