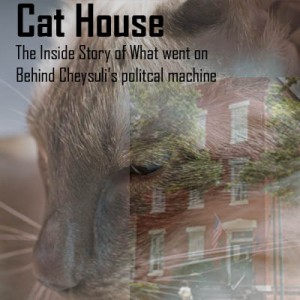 Today’s anticipated release of the book Cat House, by a reporter who went undercover to find out the inner workings is sure to be shocking on many levels.

Initially, it just seems to be the story of connections, innocent connections that would make sense.  It’s no surprise that New Jersey mafioso Tony Soprano should know the infamous Whapinator, Samuel Alphonse Meezer.   What’s more shocking is that both have ties to the Cat House, which also ties them such notables as the Domestic Terrorist Group, the Pooses For Peace, as well as Fashion Diva Daisy the Curly Cat, stars such as George Clooney and Johnny Depp, not to mention political figures like the late Senator Ted Kennedy, Senator Russ Feingold and Congressman Dennis Kucinich.  More troubling is that recently there have been many visits to the infamous meeting place by Bo Obama, leading to speculation that even the president may have been influenced by this group, rumored to be led by fugitive Cheysuli.

Conversations recorded inside the House refer to asking Cheysuli about a variety of issues and deferring to the former presidential Candidate in a way that goes beyond mere friendship.

The Cat House is sure to be shocker, showing how close to real power one megolomaniac Siamese came to being president.  More frighteningly, it shows that she still might hold power, but behind the scenes.  Even as a fugitive she continues to maintain a hold over many followers.   Buy your copy today! You won’t believe the secrets she could be hiding!