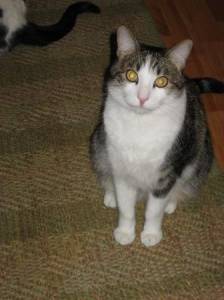 I realize it’s hard you guys–you don’t go traveling.   However a very small group of cats keeps winning.  Once again: Kaika is my Sunday guest star.

Are you at the Lincoln Park Zoo?

He was kind enough to not identify which cat I was.  However, the feds have been tracking me during the hams of the world tour. I don’t know how they do it. Perhaps it is the pork hanging from my mouth or the lamb I am riding on?

The Island Cats also found me

We think you’re at the Lincoln Park Zoo in Chicago…but where’s that lamb that you’re supposed to be on???

Sneak over to the Ham Tour when you’re done there!!!

Nina the Torbie was also correct

At any rate, this was in the Lincoln Park Zoo. I had hoped to fool everyone including the government who is after me again.  I figured no one would ever know which one I was and also there are lots of zoos right?

Sweet Praline was a bit right:

you’re taking it easy in the sunrays beside a tiger!

Gandalf and Grayson and Whitey guessed I was at a zoo so technically they were also correct.

Wow! You’ve got yourself some good protection if the Feds do find you!

Alas, the tiger was a big chicken.  When the feds came he ran and hid…

At least I have friends like Harley who are helping me find out who are conspiring against me!

Harley is a little bit worried that some of the “tea party” protesters might be trying to frame you, Chey!

Oh dear–I hope not!  They are awfully well funded by corporations!