Hide Search
You are here: Home / The Latest With Chey / Mobs Descend Upon Cheysuli 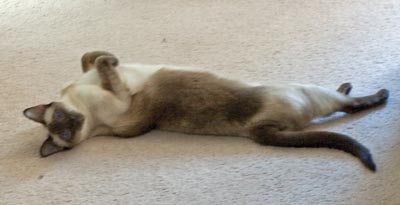 Angry mobs descended upon Cheysuli the other day as she lay sunning herself.   The mobs had been told by grassroots organizations, paid for by anti cat groups, that Cheysuli was planning to take over the world.

Cheysuli immediately saw them coming and went running for her home.  She barricaded herself inside and called the police.   Several people within the group were found to have had weapons.

“We don’t want that cat on the lawn,” stated one.  “Having her out there could mean the government would take over my medicare!”

“I can’t believe they let her out like that!  She is such a socialist cat. I heard she wasn’t even born in the United States.”

“That cat is a fascist socialist,” said another.  “She’s the worst kind of Nazi Communist.”

While Cheysuli was observed in her window, accompanied by body guards who were called back from her failed presidential run, she had only this to say,

“I really can’t address their concerns.  To do so would give credence to the utterly absurd.”