Hide Search
You are here: Home / The Latest With Chey / Thankful and furry bum Thursday 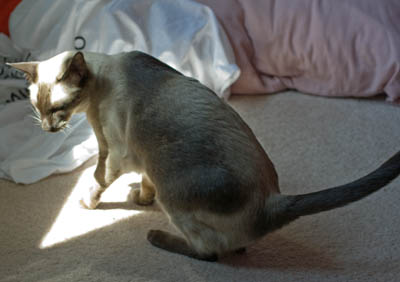 Aren’ t you thankful you get to see me again? I’m thankful I no longer have to smell that shirt!

I will be very thankful when this heat lets up. It is so hot that the Male went to the dentist instead of going golfing. That’s right. He did something he hates instead of something he really likes because it was just too hot.

Seattle isn’t prepared for this heat! Tomorrow it’s supposed to be a little cooler–only 98. Then on Friday it really cools off–a mere 88 degrees. That is still “unseasonably warm” but at least we won’t swelter.

The Woman knows enough about buns and the way people kept them cool that we got the benefit of her knowledge. While she was out on this hot day she gave us a nice big plastic jug of ice to curl up with. While we appreciate the thought, she is not sure that we took her up on this concept. I’m a cat. We never play with the toys we are given!

Oh and this is my furry bum for Hans!