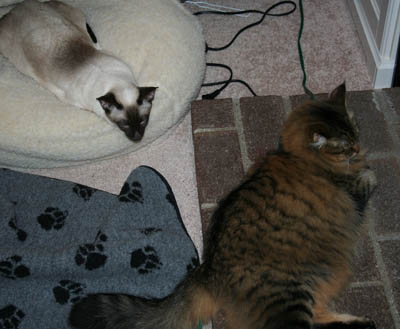 I think we would both be much more thankful if the Woman cared enough to take a photo of the two of more recent than January… um hello?

We don’t even look like we like each other much here. Well that’s probably true.  We don’t hang out together much. Maybe that is why Gemini is acting so lonely sometimes.   She used to get to pick on Georgia.  I just avoid her.

I do hang with the Woman quite a bit but not all the time.

She is considering taking Gemini into Dr. Brienen who was Georgia’s doctor and is mine.   She can recommend a homeopathic for Gemini and that is way easier than rescue remedy, which we both try to avoid.  I think that perhaps the Woman will discuss the pros and cons of making our food.  However we aren’t all that thrilled with the raw foods she has been making for herself. We won’t even sip her whole raw milk (it even has the cream top!).  She thinks we are a bit on the picky side.

I do have to say that I am quite thankful that no one (me) ate the toothpaste in our house.  That just sounds icky. Did the Woman say picky?  Yeah.  So?