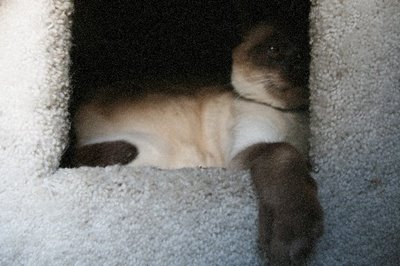 Today’s Sunday guest star was the first cat to make a comment. I guess this was easier than I thought Maobert Snickles guessed where I was,

Shelbyville, Indiana, at the Statue to Charles Major.

I’m sure thare’s a state fair nearby, Chey, ware yoo can lode up on fried twinkies and corndogs.

Alas Mao. I am quite a finicky eater, turning my nose up at almost all human food and eating only my Blue Moon Solid Gold crunchies right now.  The Woman doesn’t know why I have put on weight. I am sure it is all the super nutrition available to me in that food.

It’s offishully called the Balser and the Bears Statue, and it’s on the Public Sqware in Shelbyville.

It depikts a seen from the book “The Bears of Blue River”, written by Charles Major in 1856. I furgot to add that in my hurry to krak sum rood comments abowt yer wate.

At any rate, no Mao, the arm of the statue did not break–I got away.

I woodn’t werry abowt how to git away frum him. Yer so hevvy, yoo’ll probly brake his arm off.

Other cats guessed things like Daniel Boone and Davy Crockett, but it was neither of them.   It is also not Sarah Palin’s husband (as it is not in Alaska).

I don’t know who that grean bean is, but I hope you get away.

Fortunately I did get away from the evil green bean and I am fine now.  And I look great.  Nor did I get covered in silly string!