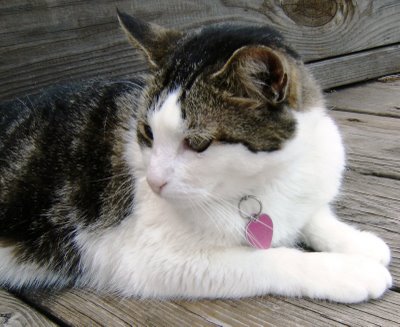 Well my good friend Parker and my friend and former running mate, Derby Sassy Cat knew where I was this week! I congratulated Derby in the comments because I completely missed Parker’s comment–although Derby was a bit more exact.

Were you at the Red’s game watching them play? How exciting!

The Great American Ballpark in Cincinnati. The team you show is the Chicago Cubs but that is NOT Wrigley Field.

Indeed–I guess if I really wanted to be found easily I wouldn’t have been in the Cubs area…but how was I supposed to know that? I don’t watch baseball. I leave that to Jeter Harris.

It seems I might have fooled a lot of cats who thought I was at Wrigley Field. However some of those cats who knew where I was even knew who I was sitting with, like Meeko and Kiara:

Dang it!! We’s too late! But…we DO know that that’s Carlos Zambrano sitting up wif the hat on, and Lou Pinella ducking down.
::purrs::
~Meeko & Kiara

It is obvious that Zevo Calamari is not a baseball fan:

I think that the couture could have been done a bit better don’t you? And the models..! Well as the Hotties say:

Well, looks like yoo is stuk in a plase wif a bunch of smelly beans hoo is ignorin yoo. Dat is just not rite.

No it isn’t. So I am off! Who knows where I will end up next week!