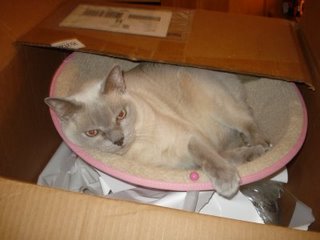 Camie’s Kitties were the first cats to guess where I was hanging out. Derby clued everyone in that I was in the US but Camie’s Kitties got the answer:

You are at Chateau Laroche otherwise known as Castle Loveland in Loveland, O-HI-O.

Eric and Flynn had this to say:

Darn! We are too late. Mum just found it by looking through Castles of the United States.It says:
‘Chateau Laroche is the work of one man, Sire Harry Andrews, who started building the castle in 1929. Most of the stones from which it was constructed were carried in buckets from the nearby riverbed. Mr. Andrews would on occasion let someone else do odd jobs such as mixing mortar, but he laid every stone himself. Some bricks used in the building of the castle were made by pouring cement into used milk cartons and removing the cartons after the cement had hardened.’
That was a lot of hard work for one man!

Indeed it was, wasn’t it? I guess some of the men who were part of his “knights”, an organization he founded, actually helped out and keep the castle up. It continues to be private property but they give tours and have a little video about the history. It’s rather interesting.

Parker, who is from O hi O also knew where I was so it must be pretty famous!

And to the kitties who suggested I was at White Castle–after the Woman’s experience there I knew to stay away from White Castle! Daisy was hoping I was at Sleeping Beauty’s Castle, but I am not sure that Harry Andrews was any beauty but he did sleep there…