Hide Search
You are here: Home / The Latest With Chey / TattleTale Tabby Tuesday (or not) 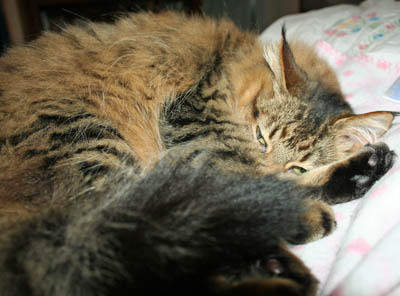 Someone keeps making my Daddy’s outdoor sandals wet. He goes to put his feet in them and then his feet get wet. They are by the door with the other shoes that don’t seem to get wet. Georgia couldn’t be doing anything because she does not have such good aim.

I would not do such a thing, unless I accidentally tried to hurl once. But this has happened more than once.

I think it is Cheysuli and so does Momma. Because Cheysuli does not always like my Daddy. He likes to look at her and make her nervous. Also he says things about her that aren’t true, like that she looks like a pig, even though she is nothing like a pig except in eating, which I think makes her piggish but not a pig.

I can see why she doesn’t like him but no one has caught her using his shoe as a litter box… or if I have I am not telling!

My other tattle tale is that it is Chey and Latte’s anniversary today!  They were married two years ago today the first of the huge weddings in the blogosphere!