Hide Search
You are here: Home / The Latest With Chey / Cheysuli Speaks Out about The Male 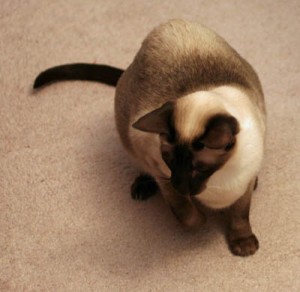 Many cats have asked me about the Male.   They don’t understand why I don’t like him and why I wish to send him off.

Here’s the thing.   The Male was driving when I was taken from my first home and my kits.  The Woman looked back at me and said soothing and stupid things to me as I sat in back, glaring at both of them.  The Male just drove.  When it was The Woman’s turn to drive, she had to tell him to look back and see how I was doing!  Can you imagine?!

Then, he thinks that he is superior to me.  I think that secretly he worries that he is wrong so he does all sorts of male things to try and prove his superiority which just makes him quite tiresome.

Finally, he throws socks and underwear very close to where I snooze.

However, he is very good on the other end of the feather toy. Of course, he only does it when the Woman orders him to on my behalf.   He doesn’t listen to me.

And that last part says it all.   There really is no hope is there?