Hide Search
You are here: Home / The Latest With Chey / Cheysuli Held on Male Fraud Charge 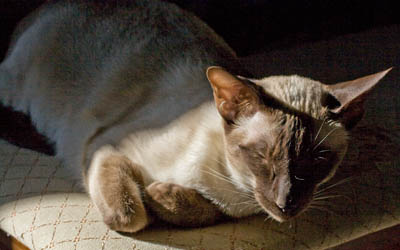 Will Cheysuli ever see sun again? Rumors abound that the former presidential candidate was caught for postal fraud.

Apparently the feline decided to get rid of the Male of her caretakers and had addressed a large box to Cory Cat.  The size of the box and the calls for help alerted postal officials that there was something strange about the box.

They called the bomb squad and opened the box.   Such a precaution was necessary given the “Please Drop Box HARD” and “Feel free to damage” notes all over the box.

After careful examination, the box was opened and they found the Human Male.  It is unlawful to send people though the US postal service.  Additionally given the nature of the packaging and the way it was carried out, officials are holding Cheysuli in custody until they figure out what to do with her.  This could keep her in holding until her other caretaker returns as the Male is reluctant to be at home alone with her, even for the short period of time the Woman isn’t there with either of them