Hide Search
You are here: Home / The Latest With Chey / Gemini’s Expose of “Chunky Chey-Tocks” 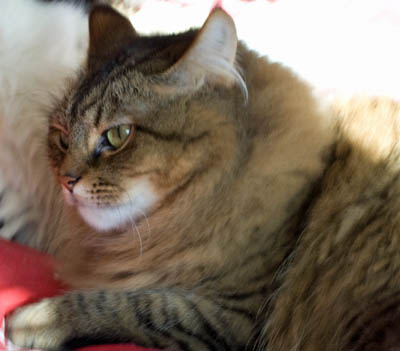 Cheysuli, owner and editor and writing of The Cat Post Intelligencer was seen on stage at the half time show the Pooses for Peace. While commentators thought she was dressed as a football in honor of the Superbowl, in actuality she has just gotten fat.

“It was hysterical! She was like this football with legs,” said one un-named source who I call Momma.

Cheysuli was not amused. She was not dressed like a football in honor of anything. She has merely been cleaning up a bit more of Georgia’s food than is normal and now does tend to resemble a football with legs.

“And I thought she was having kittens,” said another source.

She is not having kittens, having been spayed after her third litter. Cheysuli has just gotten fat.

Cheysuli refuses to comment other than to say she doesn’t plan any full body posses. She has taken to watching Oprah and reading O magazine for diet tips.