Hide Search
You are here: Home / The Latest With Chey / Cheysuli Possibly Suffers from Sleeping Sickness 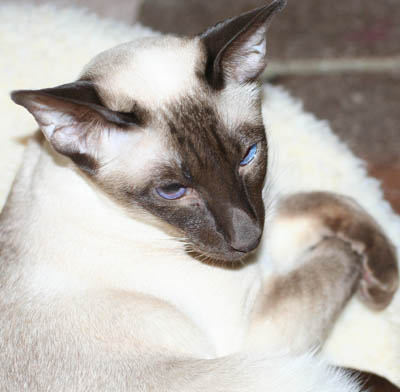 Former Presidential Candidate Cheysuli has been seen snoozing by the fireplace at all hours.  Rumors abound that she has some sort of Sleeping Sickness.  They say she rarely gets up to move.  Food has to be brought to her and put under her nose.

Other sources say that she happily gets up and chases Gemini whenever she likes, still those in the know point to how many times we see her in that same old bed.

“You’d think she’d at least change position a bit more so that we’d know she actually does move,” said one skeptic.  “I mean does she have people feeding her right there?”

Cheysuli actually commented on this, “I wish,” said the former presidential candidate.

While she is not getting any skinnier, most reports suggest that she does actually move now and then before she flops back down in front of the fire.  “Besides,” said her servant, “I’d leave the fire on all the time.  When it’s not on, she naps in her OTHER bed…”