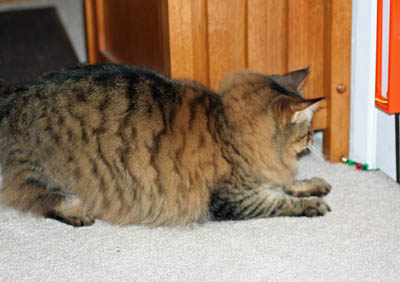 Oh we got a new toy for Chrissymouse and it is a flingamastring and Momma turns it on and I pounce a lot. Mostly I catch it but this time I did not but it is the only photo she got of me pouncing! I think I move so fast that she can’t get a good photo!

I like my toy. Cheysuli doesn’t interrupt me when I am pouncing at it either!

Now to look back at our blogging history, Momma wrote about me for over six months before she started letting me blog myself. My blog was around first but I didn’t get to post until April 9. That was a very long time. Momma wrote about me a lot from August 2005 until then, several times a week. She talked about all the fun things I did.

I also got to look back at when I started meeting all the other cats I met. Socks, Abby and Blackie were some of our first regular visitors. They don’t blog too much any more. Then I found some comments by the Meezers! They were some of the first cats we met after Kukka-Maria. She also visited me several times. Fat Eric was also an early visitor!

In July of 2007 Momma got tired of doing both blogs so she made Cheysuli and I share. We got to use Chey’s blog because it was linked to the site she had created for products for Siamese cat lovers. So I only really get Tuesdays and sometimes Thursdays…. By that time we were getting a fair number of visitors on both blogs, but I think I was always the more popular cat. I am ever so much nicer than Cheysuli.

It was very windy last night and we lost cable AGAIN!