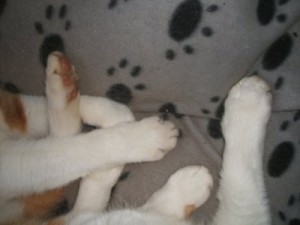 Wow. I didn’t think this would be that hard of a photo. And I am sure the cats who sent it to me did not think it would be either…

Cable car to the top of Montmorency Falls which are 6 or 7 miles from Quebec City. They face the Ile d’Orleans.

And who sent the photo? Well here they are in this photo. Who has such lovely cute toes like this? Well, of course it is our friends Eric and Flynn! Yes, their human was here on vacation, though I don’t think they hung from the cable like I did… I suspect they were able to just get on one of the cars.

you are cheyzilla and you are trying to flick those little boxes (of people?) into the river so what ever is in there will meet an untimely death.

oh, you wanted to know WHERE you were. We have no clue at all. then again, we never do. about anything really.

I think I saw that episode on the Amazing Race!

But Daisy you didn’t remember WHERE I was. And here I bet this WAS on the Amazing Race at least in one season or another…

Whoa…the least they coulda done is let you ride in the car thingies instead of making you inch your way across on the wire. That could ruin a kitty’s pawdicure really fast!

And for that, I’ll have to go look for an easier one for next week!