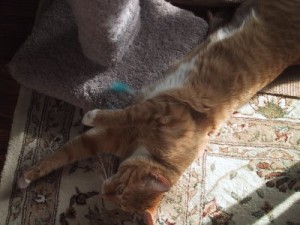 Okay so it was a tough one this week. No one actually got where I was. The Woman was scraping the bottom of the barrel with interesting places I could be. Fortunately we have some great photos from some other cats for the next few weeks and then we can go back to our own photos, some of which are easier than others.

I was in Roatan Honduras, which is actually an island off the coast of Central America. As we said, Latte and Daisy were the first two to guess islands in the Caribbean and Parker guessed Mexico so they were all very close, but not quite.

We thought you were in dee island man…..which one we did not know.

We thought that was a very correct answer, don’t you? Most of you didn’t. Heck at the time, even I didn’t. We’d have had some easier shots but alas, this was right after Hurricane Rita and our cruise did not stop at Cozumel or Cancun like they were supposed to. Alas.

Fat Eric and Derby were carefully reading the comments and picked up my clue but did not guess correctly either.

Cory Cat didn’t quite get it, but we liked the quote:

say Port-au-Prince….because you are prince of cats! Be a prince if you can’t be Prez!

Well I guess Princess will have to do, won’t it? I am a girl. And I think I am the Queen of Cats but Port-au-Prince is a good place to be don’t you think?