Hide Search
You are here: Home / The Latest With Chey / Blog Blast For Peace 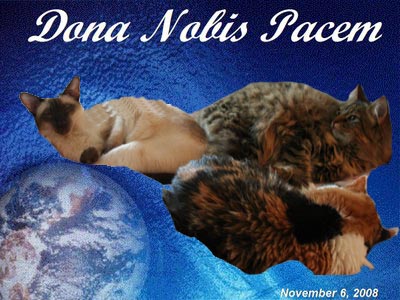 Once again it is time for Blog Blast For Peace.

Barack Obama is a man who really exemplifies something we think of when we think peaceful. Hateful words were thrown at him and his family at rallys. The idea that he was a terrorist or somehow bad for wanting to serve his country in the highest office must have been incredibly painful for this man. Yet, at every speech and every debate he let none of that show.

When supporters tried to boo after he mentioned John McCain’s name, Obama stopped them saying that McCain served his country well. He and McCain just disagreed on political policy. The best way to help Obama was to vote for him and not to boo a hero.

Joe Biden reminds us that no one serves as a politician because they are evil. Everyone wants to help and we must always remember that in our dealings with them. Everyone wants the same thing. We just see different ways of going about getting it.