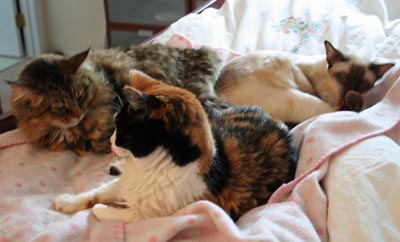 I am thankful for two things this week. Number one, I am not the only candidate to state that healthcare is a right. Senator Obama said that the other night at the debates. Speaking as a child of a health care provider and thus having a great deal of expertise in this issue, I do not believe his plan goes far enough, but it is a beginning. Saying that healthcare is not a right is akin to saying someone doesn’t have the right to live.

I am also thankful for bodyguards…

Recent reports are that supports of the McCain/Palin campaign are not only getting away with threatening Senator Obama, but threatening Candidate Cheysuli.

“Someone needs to kill that liberal #$% Cat!” stated one person at a McCain rally.

“I’ll help ya. I HATE cats,” responded an unnamed voice that sounded eerily like Tina Fay.

Cheysuli’s bodyguards are heightening security. While the Secret Service is taking threats on Senator Obamas life far more seriously than the rival campaign, which seems to be egging them on as if they are inciting a lynch mob, they are less inclined to take threats on Cheysuli seriously.

“We only have so much man power and we have to reserve that for humans,” said a Secret Service Spokesperson.