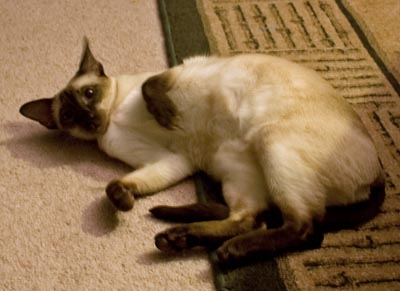 Candidate Cheysuli has taken a few days to go visit a sick feline friend. Sources outside the campaign wonder if she’s really doing this or if this is a cover for her to change her birth certificate.

While Cheysuli has claimed to be only a regular house pet, despite being a purebred Siamese, sources have long been critical of her background her ability to understand the needs of the ordinary cat. Rumors abound that Cheysuli is actually covering up her show records, that are rumored to exist but have never been found.

“I really think it’s just a story about her not being shown. She’s obviously a perfect cat and would have been shown by any smart breeder who didn’t eat her for dinner. You betcha I would have!” said one unnamed supporter of another candidate.

“Cheysuli was never shown. She broke her tail as a kitten and was ineligible under CFA rules. Even if she had been shown, she certainly wouldn’t have placed,” said a campaign member. “Additionally, she is currently  a housecat, having been ‘petted out’ by her breeder.  Cheysuli has close ties to many friends and is currently visiting a sick friend. Now lets get back to the issues.”