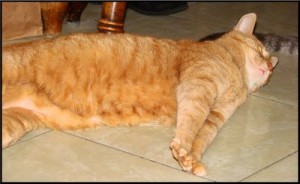 Oh my Bast, I think that I finally have a guess as to where you are, Chey! Could it possibly be a castle near Berlin, at Potsdam? Maybe called Sanssouci, a former summer palace? My dad was in Germany before and he likes historical buildings.

Yes, China this was the title of the photo we were sent from Merlin’s person. We decided to use it this Tuesday because of course, as Camie’s Kitties pointed out (they also knew where I was) is Merlin’s birthday.

They have a selection of oil paintings hanging there and one of them is of me!

How very exciting! I ran right over to admire with awe the painting of Yao-lin!

But for those of you who don’t know about Sansouci, allow Camie’s Kitties to tell you:

China Cat got it right. You are Sansouci, the summer palace of Frederick the great, the king of Prussia. Sans Souci translates (roughly) into Without cares or carefree.

That would be a great place to relax before the final big campaingning blitz before the election.

And they are right!

And guess what I just learned?! It’s China Cat’s birthday too!