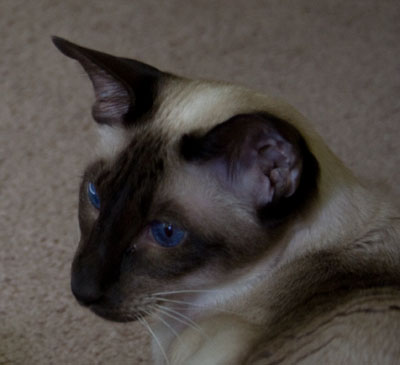 Hot on the heals of the Democratic Election that had even Cheysuli saying: “Wow! I should apply for First Cat. Or insist Momma Biden take me in,” John McCain announced his choice for Vice Presidential running mate.

Speaking exclusively to Candidate Cheysuli we got her reaction.

“My first thought was Wow! Here’s someone who has almost as little experience as I do. I mean yeah she was mayor of Wasilla, a city of nearly 5500 people at the last census, and she’s had two years as governor of Alaska and is only just now being Investigated.

“A full two years before being investigated on criminal charges suggests she’s really good. I’m still campaigning and I’ve been indicted on credit card fraud and they’re trying to make a Rico case against me because I know the Whapinator.

“I mean I can see how this would appeal to John McCain.”

When asked if she thought the Obama/Biden ticket or the McCain/Palin ticket were more likely to attract her voters, the candidate said, “Well as a well spoken, educated and experienced political cat (I’ve been campaigning online for nearly three years now) I’m sure I’m more likely to appeal to disgruntled Hillary supporters who want to vote for a woman. Palin just doesn’t cut it.

“Additionally I think I show off family values better. While Biden may have had a large family on stage, when I get all my kits together–you just wait! We’ll need a bigger stage. Even Governor Palin, who does not support a Woman’s right to choose (preferring passive aggressive tactics like getting former husband’s fired from their job) can’t beat my birth record! She just doesn’t have the equipment I do. (No Wait, that’s Kukka Maria’s line. Don’t print that! Hey! We’re off the record!!!)

“I really think that I have both camps covered and I expect record turnouts and a landslide vote,” stated Cheysuli.