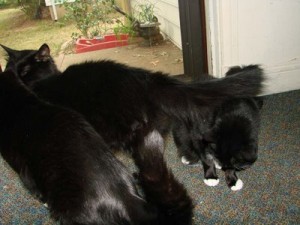 Well everyone seemed to have a bit of trouble with this until the Hotties, led by Sanjee, did some research on where I was.

They found out I was on the Evergreen Point Bridge, which to me is known as the 520 Bridge going over Lake Washington.

Miss Peach also knew as did Benjamin. Benjamin even knew what direction:

it looks like you’re heading west on the 520 bridge–also known as the evergreen point floating bridge.

Miss Peach, no we weren’t going to visit Bill Gates, I believe his house is behind us.

Daisy Mae Maus was correct. Yes that is the University of Washington across the way (to the right). Traffic on the 520 Bridge is some of the worst! And it got worse the year that one of the floats wasn’t working and they couldn’t use the whole thing.

Someone said that they couldn’t tell if those were mountains or clouds in the distance. It’s Seattle. It’s both.

Daisy , like several other cats including Gandalf and Grayson, had a very good guess (and it was correct).

I know, I know! I am almost certain that you are on a bridge!

Cheyzilla!! I don’t know where you are, but you have GOT to telyport over when my Halloween Village & Christmas Villages are up. Those cars are fun to whap