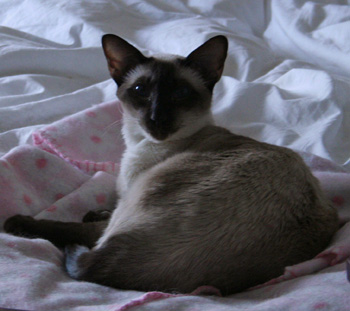 Today’s Meezer Rule: If people start trying to encroach on your territory, do what you do best: SING.
From the Cat Post Intelligencer:

In a blatant attempt to catch presidential front runner, Cheysuli, Barak Obama was seen dancing on the Ellen Degeneres show.

Rather than attempt to out dance the Senator, Cheysuli yowled “When Cats Take Over the World” as a guest on American Idol. Simon Cowell was speechless.

The standing ovation as she finished went on for nearly an hour. This is one candidate that people are sure not to forget. Idol producers offered ear plugs and hearing checks for those in the front row while she yowled. Several reported complete hearing loss, however they continued to smile, they were so thrilled by meeting the candidate.

“I think we have just seen a new way to be blown away by the Winds of Cheynge,” said one pleased supporter.

Cheysuli has risen even farther in the polls and holds a commanding lead against both major party front runners. The human front runners are understandably upset about being upstaged by a cat, even a Siamese.

“I’m not sure it’s Constitutional to have the Prime Minister of Italy running for the US Presidency,” stated Barak Obama. Cheysuli however is convinced that it’s fine.

“I don’t think it’s fair,” stated one Clinton supporter. “She is already ruling one country. She should let someone else rule this one.”

“Cheysuli does not understand that Al-queada is in Iraq, not Italy,” commented Republican Candidate John McCain.

“I’m not worried about running against Cheysuli no matter who she thinks she is,” said Ralph Nadar who recently announced that he would be entering the election. “Of course, I might have had a chance if I could have been her vice president.”