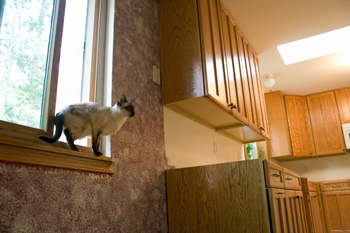 The Meezer Rule for today is to: Guard Your Territory. Here I am guarding my new kitchen territory. As you can see there are some rather unoriginal cabinets in oak (chosen by the human male) and then this Bast-awful wall here. Actually it’s starting to grow on them. Both colors looked nice with the tile but together they set off exactly the wrong colors for the tile to blend in, so the wall is plain in the kitchen now. We’ll see how long it takesÂ  the woman to make the rest of the wall plain (probably in red red wine, as it looks so nice on Georgia). The Male, with his usual lack of taste likes it as it is.

I also guard my property in that I made quite the big stink when I found that my passport documents had also been accessed without authorization. Fortunately as the Prime Catminister of Italy, I travel on my Italian passport. Therefore, they weren’t able to use my extensive travels to Cuba and Venezuela, (where I go to see my dear, dear friends who are not allowed in the United States) against me.

I actually was shot at getting out of a plane on one of my travels. The DEA has this on tape. Fortunately, it’s not a very good likeness as apparently the DEA thought the plane I was on was a drug running plane.Â  I was coming into the US from Venezuela.Â  My bodyguards got me away before we were arrested.Â Â  This proves, however, that I, unlike Hillary, really have been fired upon.

And you all were wondering why I needed so many bodyguards!Â  Remember, whatever it takes: Guard your Territory!