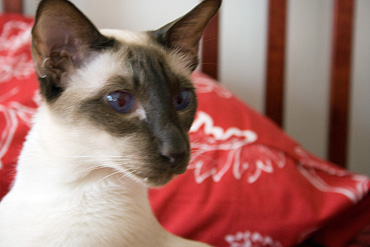 In an unprecedented speech, Cheysuli has managed to offend all her presidential human rivals. Cheysuli’s speech attacks John McCain for being “an old white guy with bad hair and no memory.” The McCain camp planned to issue a comment on this, but they forgot.

Next the Presidential Candidate came under fire from the Clinton camp when she called Senator Hillary Clinton a Woman. “This is just appealing to the sexist nature of the race,” stated Senator Clinton.

Finally she came under fire from the Obama camp by calling the senator “A Male, much like the Human Male. Why would I trust him?” Obama supports state that “Obama is not, nor has he ever been in any way related to the Human Male. We resent the implications, Cheysuli.”

Closing her speech Cheysuli said, “I am tired of everyone else getting to play the human version of Thundering Herd of Elephants around the campaign trail. I just want to be a part. If you don’t like what I say, grow up and start talking about the issues. And if you want to bribe me, stop sending me those stupid tickets to Vegas, they keep kicking me out. Play with my feather toy!!! ”

edited note: we believe Senator Obama is offended by being compared to the Human Male *I* live with. I admit it was harsh, but I am honest.

And of course this is Feature Friday so that means that the most intriguing comment will be the Sunday Guest Star! And you know what? This week’s guest star leads off the CARNIVAL OF THE CATS!!! So get your posts submitted so we have a BIG one!