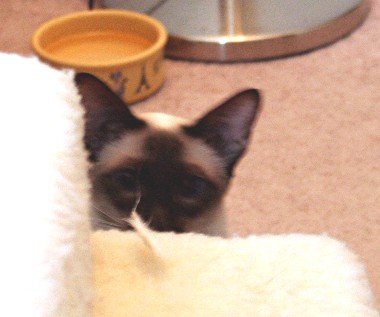 From the Seattle PI:

A rally for Cheysuli, the Critters for Total World Domination Candidate, was held Sunday at Marymoor Park. Critters choose the venue due to it’s excellent off leash dog area. Additionally, Clise Mansion was part of the rally, which gave the cats a place to curl up and nap, away from the dogs.

The humans in attendance flitted from one area to another, as did Cheysuli. Sunday’s rally is to boost support for Cheysuli in the elections on Super Tuesday.

“I come by my political stance honestly. I have not polled voters and decided that it would be good if I were for this issue or against another. I believe what I stand for. I can’t promise to get everything done. No candidate can. We can only work for what we believe in and I believe in every position I have taken.

“Meezers are often criticized for their vocalness. Well I tell you, I can use this to my advantage! Who can turn down a determined Siamese?!”

The crowd was screaming by this time. Certainly Cheysuli has this population in her pocket. And what a population. While there were many dogs and cats, there were also celebrities. Al Gore and Johnny Depp rubbed shoulders with more nefarious names like Tony Soprano.

Cheysuli is supported by some of Hollywood’s most famous and vocal stars. She has an entourage of Pirates, who seem to be having a discussion with thoseÂ  associated with organized crime. Straight cats and gay cats love her. Cross dressing dogs leave their owners to campaign for her. Pooses for Peace is rabid about her. The Whapinator stands behind her as do the Jedi. There are Borgs here, carrying signs in support of Cheysuli, who recently helped assimilate them into the Siamese Cat Family. This is one of the most amazing rallys.

It is rumored that amongst all the celebrities and fanfare that even the Feline Empress has made an appearance. This is one crowd that even she doesn’t stand out in.

Support Groups for people with Gastric upset and Gastric problems are now supporting her, so the area is a bit ripe. At any rate, it is obvious that Cheysuli is a uniter and not a divider. In fact, her campaign has been run cleanly and honestly. She has thrown the occasional hiss but no childish hissy fits. Cheysuli is really the candidate for the people and for the critters.