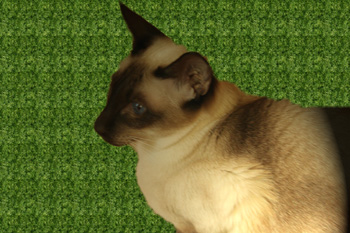 Well I hate to complain but sometimes that’s the way life is. Friday was a tough day. It all started upon learning that all my senators were campaigning for Hillary and not me. Then, we kept getting prank calls from Hillary, telling my humans to caucus for her. I mean, come on! Don’t they know who they are calling. We got FOUR calls!

Then as I was resting on some things on the bed, the Male came in and pulled one of them out from under me and it turned out to be his underwear. He then proceed to fit them over my head, so that I was wearing his underwear on my head. (Ewww… now I wonder who will search THAT phrase?) I thought it was rather fitting.

While I had hoped to see signs that humans were endorsing me in droves, inspite of the requirement that only humans can vote (and therefore be elected) the state was overwhelmingly dark blue by CNN’s call. Obama won Washington handily. Of course, at least he does speak as well as Meezer, I’ll give him that.

And a happy belated Birthday to Daisy the Curly Cat. The Woman got up so late yesterday it was really too late to edit the post and say anything!