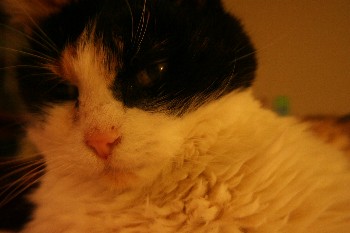 I would like to thank all my fans for all the memes that they have tagged me for and what they want to know about me.Â  Also I have been awarded some more awards.

My secretary is falling down on the job lately as far as getting those things written down so we can thank everyone.Â  I think popularity comes in spurts and I have definitely been showered.

I am thankful that Georgia is doing well.Â  In fact as one of the things that I would do in that meme that Yao-lin tagged me for (I have that down!) I would make her well!Â  That way I wouldn’t have to follow her all over the place making sure she is okay.Â  I am also hopeful that I get a bit of food as she often gets special treats. Â  She had to have another remedy.Â  The first dose didn’t work so they had to up the dose.Â  This isn’t good news in the long run, but she has lived nearly a year longer than they gave her on the outside. Â  We are always thankful for that.

She hates to be brushed and hates to have her mats trimmed out.Â  Anyone have any ideas?Â  She loves her pink blanket from the Meezers!

I would also like to thank all the cats that are out campaigning for me. I know that Miles said he would be out there for New York. I can only hope that his abilities are better than those of the Clinton camp!