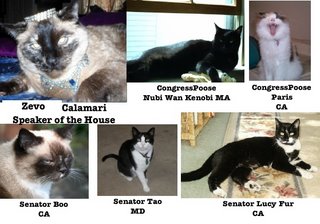 Well, once again this was a tough choice. We had a number of people who liked Worf. One who liked Sara Connor. We had some write ins, amongst them Dr. Who and the Incredible Hulk. I did like the suggestion about the Whapinator, but I think I have other plans for Sammy.

So, in that sense, I was most intrigued by Zevo Calamari. Zevo said:

I nominate my roomie, Nubi Wan Kenobi. He is one of the generals of the Bite & Run brigade, a Jedi and a great biter. He is strong with the Force, so Borgs should not be a problem.

I would be happy to Fed-ex him to you with a honey baked ham. I should mention he is a pillow hog.

Now, there are a number of things that I like about the idea of Nubi. First, he has a proven track record of the Bite and Run. Second, he is a Jedi. I have had to fight off and assimilate the Borg. As Miles has pointed out, those show tunes get old FAST.

Finally, I liked him because he came with a honey baked ham. No one else offered food. I can’t believe you didn’t think of it!

I should like to thank everyone who offered up family members. I would like to thank Captain Jack for offering himself and I will have to chat with you. I don’t think a Pirate Cat stands out too much. I mean, it’s not like you dress like an FBI agent or anything.