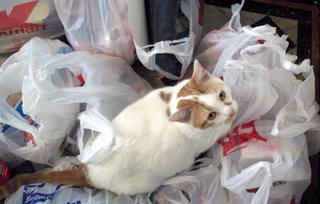 Well this week, while we laughed at many many of the comments, we were certain Rocky from Artsy Catsy was the winner. You might ask why when I think all of you had us laughing. Well, he has added to our slogan and I’ll explain that in a minute.

Chey, I think that was a very well thought out â€™spontaneousâ€™ poot, ripe with symbolism. It exhibited that you are a candidate who will cut the hot air in this campaign and bring Winds of Cheynge to the Whitehouse.

Now, I think that I like the Winds of Cheynge idea. In fact, it has me debating the slogan. Does it become

What do you cats like? I will be working on the Woman to get her behind in gear to turn out some bumper stickers and more buttons with my slogan on them!

And I would like to thank Miles Meezer for graciously agreeing to poot at the New York voters while campaigning for me. I suspect this is what will garner me more delegates than Hillary her home state!