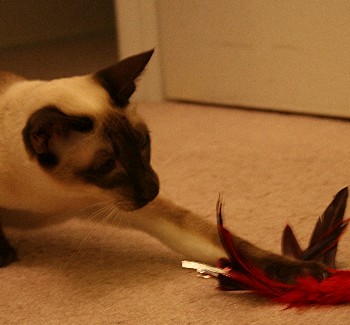 I must say, I did not do as well in New Hampshire as I had hoped. Of course, it is Clinton Country as Obama’s supporters say. Of course, Hillary has always been jealous of me and quite peeved that I did not choose her as a running mate.

I guess the fact that I got 33 votes wasn’t too bad. It was better than expected considering there are very few people registered with the Felines for Total World Domination party there. However, I think a few people from Pugs for Total World Domination came out to support me, as so far as I know, they are not running anyone for president as this time.

I think I’ll take a rest and focus on the positive. If I were president right now, I probably wouldn’t have time to play with FEATHERS!!!!

It is, of course, Feature Friday! Remember most intriguing comment becomes my guest start. My guest star will lead off Weekend Cat Blogging which is being held HERE!!!