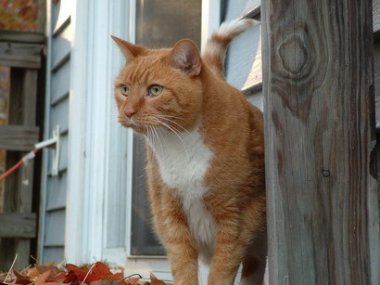 This week’s Sunday Guest Star had a long lead from the other cats. While I loved the pithy comments, I think Detective Skeeter can be the only cat for the choice. He definitely thought and did his homework, although we don’t seem to be any closer to rescuing Daisy.

I heard that Daisy has been caught but she is keeping her mouth shut. She has been forced to wear platform shoes and got no temptations treats. I hear they are threatening her with a mullet wig and a psychodelic mini skirt next. Torture is hard.

Skeeter finishes his many comments with:

Chey – I can only offer a final (though inconclusive) reportâ€¦ I have received â€œinformationâ€ from a number of (un-named) parties. And (partly due to finding a mouse-head on my doorstep this morning) will not be pursuing the matter further (officially, anyways – Iâ€™ll always keep my ears open for stray facts oferheard in cheap nip-dives)â€¦

The actual â€œwhapperâ€ seems to be an underling of a more secretive mastermind. It seems to be pawlitically oriented. My instincts point me toward another presidential candidate, and I continue to suspect the party I mentioned earlier, being your most obvious competition.

But it is entirely possible that the actual operation was planned and carried out by oferzelous mid-level campaign workers. It wouldnt be the first time that has happened wif no knowlige of the folks at the top, ya know?

I can say that the â€œwhapperâ€ is indepentantly identifyed with â€œham-breathâ€, is a large kitty (an there may have been 2), an that some witnesses haf been threatened with loss of treats an some worried about bein pounced in the dark.

I saw Sam The Reporterâ€™s whap-wound mysef, so I can verify it happened. It looked like it would be hard to self-inflict.

Ham may be involved, but if you want to pursue the matter more, I say, â€œfollow the Nipâ€!

My concludin suggeshun: Scratch it off as a political campaign trick, keep yer ears open, an take the High Road (ignorin it further for now).

Me? Iâ€™m gonna take a â€œvacationâ€ from my regular places an check careflee aroun my litterbox for mousestraps and suchâ€¦

However you may want to go to Feature Friday and check out his thought process.

His thorough detective work has given the LVPD several things to think about.

Miles Meezer is no longer a suspect, although he got a fine of 5 temptations for Indecent belching on a public blog.

Sammy Meezer has been given an alibi by both Pepi and Abby. Whap management therapy has been recommended for his use of whapping as a solution to other problems.

Pooses for Peace has fled the country to an unknown location that is probably Austria or perhaps Switzerland and they have not been found.

The Italian Authorities will not allow extradition for Opus and Roscoe.

DNA has ruled out Hendrix but remains inconclusive about Bendrix.

I can only hope that Dectective Skeeter will continue to help the authorities so we can find the true culprits, who ever they are so that Daisy no longer has to be tortured.

Go over and give Skeeter some encouragement for being this weeks Sunday Guest Star!