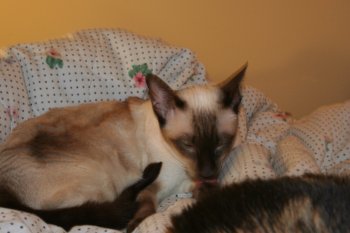 Last week Sam Smith, an API reporter went missing. He was last seen partying in Las Vegas after breaking a huge story on political candidate Cheysuli having ties to the Mob.

“We’re looking for him,” stated Lieutenant Brass of the Las Vegas Police Department. Beyond that the police have been unhelpful. A sudden storm has not helped with the collection of evidence.

Rumor has it some brown fur, that could belong to a Siamese cat was found at the scene of the crime.

“Cheysuli has been very cooperative and offered her fur for testing. The DNA was not a match. In fact, we think this may be a slightly different type of Siamese than she is,” said a source close to Cheysuli.

The LVPD is searching all Siamese known to be in Vegas. Oddly, all Las Vegas hotels are currently out of ham. The disappearances are apparently unrelated.

“We just hope he hasn’t been whapped,” stated Brass.