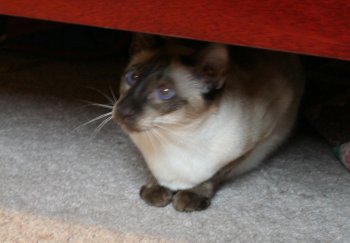 “Reporter Sam Smith, who broke the story about Cheysuli’s connection to organized crime. He reports a whapping and then remembers nothing…”

Dear me, this is awful to hear about. I have just learned that the authorities are looking for Daisy the Curly Cat. You know they monitor my blog (and my phone and everything else). Last week she said:

I think I know the culprits. But I will never tell! Because I am not a Stool Pigeon.

I hope they don’t torture her! I would hate to think that she is being waterboarded or some horrible thing!

Who do you think did it?

To save Daisy from torture, we must get to the bottom of the mystery! Who did it? The cat/human with the most creative comment and the cat they say did it will be my Sunday Guest Stars.