Hide Search
You are here: Home / The Latest With Chey / Thankful Thursday and a meme 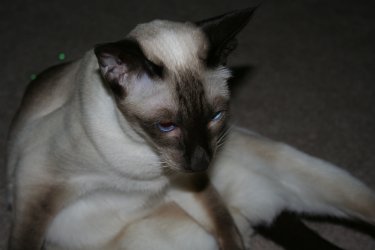 Well, I’m thankful to be back! Imagine–10 days. It was horrible.Â  I can’t imagine why the woman laughs and says that I purred and talked to the pet sitter like crazy. Obviously the woman is a pathological liar.Â  She should be fired immediately. I did no such thing.Â  Honestly. I am not a friendly cat…

I am also thankful that I have not been forgotten!

I’ve been tagged by Kelly over at It’s All Good for a meme.Â  Kelly says:

The guidelines for this tag:
1. Link to your tagger and post these rules
2. Write some facts about yourself: some random, some weird, some just plain fun.
3. Tag 7 people at the end of your post and list their names (linking to them)
4. Let those 7 people know theyâ€™ve been tagged by leaving a comment at their blogs.

The challenge is to keep it interesting without making the reader think â€œUm, too much informationâ€¦â€

So Seven things about me…

1. I’ve only lived with the woman for two years. Before that I lived with a Siamese cat breeder and I had three stunningly gorgeous litters of kittens.

2. I’m very sweet to Georgia. In fact, I am the barometer of how well she is doing. If I attack her or am thoughtless, the Woman knows that she is doing okay. When I am particularly nice, she starts to worry.

4. I am obsessed with any toys with real feathers. I have been known to completely shred and devour a small toy with feathers sticking out that my human gets from Target stores in less than an hour.

5. I have no interest in going outside.

6. Although most cats adore the Woman and they start to like her almost immediately, it took me much longer. In fact, while she had me segregated to help me adapt, it wasn’t until I saw Gemini outside the opened door, as the Woman was leaving that I actually got excited. I rolled all over the place. After that I would sometimes let the Woman pet me. I did not sit on for more than a few moments for at least six months. Now I love to sit on her.Â  I have her trained.

Now who to tag? I’ve seen some of these memes around before so I expect a number of you played while I was gone. But I’ll try:

2.Ping, because Gemini wants to know!

3. Yao-lin because… does one need another reason for such a fine fine meezer?

4. Storm, because we had such a grand time in London!

5.Â  Karl, in hopes that this will help cheer him up.

6.Â  Rocky at Artsy Catsy in hopes that this will temp his humans into letting him blog again…

7. Tara–although I expect she’s done it already and I missed it.

Now, I can be thankful that that is over and I can go nap… I am so jet-lagged.