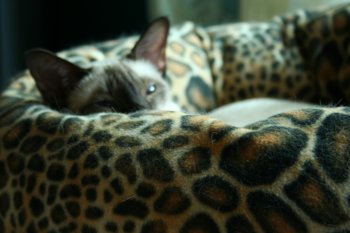 Well, I am combining many things here. I wanted to do Thankful Thursday and also post a letter and then Yao-lin tagged me for a meme! I am thankful that I have good friends like Yao-lin who tag me for memes and that I have paws that are dexterous enough to write letters.

I am also thankful that there were so many cats who could come by and wish Tara, my lovely adopted daughter, a happy birthday!

So for the catnip meme:

All you catsters out there have to do is just list 5 things you do whenever you’re on the nip, and don’t forget to tag some friends! Let’s find out just how whacked out some of us get!!

Alas, I don’t use nip. In fact, even if I try, I am not affected by it. But here are five things I COULD have done while high on nip (although I don’t use! Georgia is our nip a holic around here.)

1. I could have had a vision that I was talking to Bast and she named me her Right Paw and so I could have started to referring to myself as the Right Paw of Bast.

2. I could have started a blog.

3. I could have decided that I would run for president (honestly, I’m not sure I shouldn’t use the excuse of being high on catnip for that one!)

4. I could decided to participate in memes.

5. I could have written this open letter to Congress:

Last year Humans voted and voted in Democrats hoping for some change. Instead, you continue to sit around and do what ever the president asks for.

According to you, you can’t impeach the president because you don’t have enough votes. Instead of calling for an investigation (which you do have the power to do) and perhaps persuade other congressmen that your cause is just, you sit around and let him do whatever he wants.

Right now, the President seems bound and determined to destroy the Bill of Rights. I am afraid to go to sleep any more for fear of what right will be taken away. I hope I’m not arrested for printing this. (Can I use the catnip excuse?) The only right that I seem assured of keeping is the fact that we won’t be required to billet British soldiers in our homes. Take note Yao-lin–if you invade, bring tents.

You can’t succeed if you don’t try and none of you are willing to stand up and try something — anything. At this point, we’d be thrilled if you just stopped taking away rights and giving them to large corporations.

However, if you are going to just sit back and let the president do what he wants, I’ll be holding you to that attitude when I ascend the presidency.

So see, all the things I could have done under the influence of nip? I’m not sure who has not been tagged, so I tag anyone who wants to play!